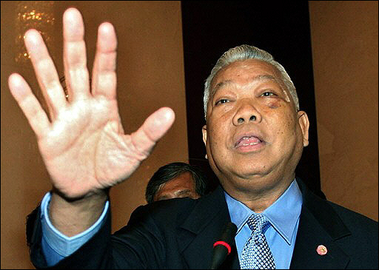 I have to say I am almost shattered with the unofficial result of the latest Thai General Election. It is likely to be in the favour of pro-Thaksin People’s Power Party (PPP). That means its leader, Samak Sundaravej (สมัคร สุนทรเวช), could get the first choice to be the next Thai Prime Minister and form the government. EEEWWWW!!!

He had been ministers many times and the hi-light would be the Minister of Transport while Thailand was in rise of bubble economy in the 80s where he could grant big projects under his authority. However, the long time in politics had taught him that he would never get to the top of the mountain because his strong base and supporters would never expand beyond Bangkok. So he’d rather be the big fish in a small pond and demote himself by going for local politics, which won him the Bangkok Governor title in 2000. But would that be enough for him? It could be until the big opportunity for him to grab the country’s strong hold of dissolved Thai Rak Thai voters and lead the party.

No one knows how long he would govern the country for, maybe until he lets Thaksin back in without any trials as promised or until another protest against his allies to lead to another coup. Have we learn something from the past at all? Here are some reminders:

I honestly cannot trust this low-rent doormat. Mind you! I did not go to vote and have not voted for almost a decade since I moved to Sydney. I have just got a new Thai ID card but it was too late to register for overseas voting this election. But I have a feeling I am not going have to wait for another four years to vote in the next election.

One thought on “The Unstoppable Samak”