Last week news. A Thai restaurant in London were slammed by firefighters and the busy shopping streets were closed for several hours after a report of chemical attack. It turned out to be another post-911 joke when they found out that the cook was just preparing Nam Prik Pao, Chilli Jam (น้ำพริกเผา). Oops! 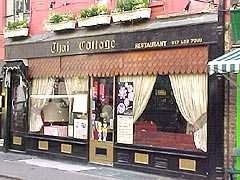 The restaurant has been there for 17 years and, I am certain, they make that recipe on regular basis. How could the neighbours mistake the aromatic fume of burning chillies for a terrorist toxic weapon and make such a report to the emergency? Mind you, when I was making Chilli Basil Stir-fry (ผัดกะเพรา), the kitchen was gassed with garlic and chilli smoke so that Stilgherrian had to poke me with chemical attack quip. But that is the way it is, the way I and most Thais grew up with.

Imagine they wrongly smashed middle-eastern restaurant for the same reason. Are we living in safer world than before or paranoia will lead us there?