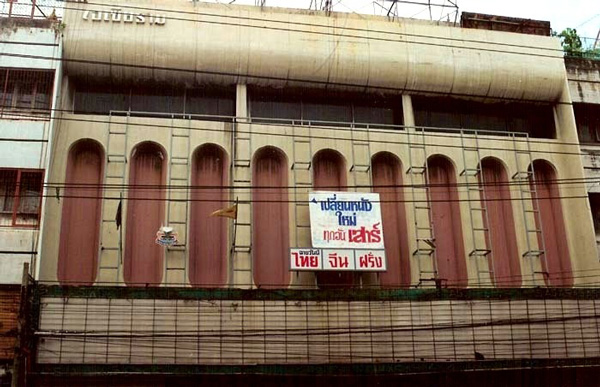 That Used to Be a Cinema in Phra Khanong Part 1: Asia Rama

Have you ever wondered what the building you live in now used to be? When I found out that the condo I am living in now was one of the stand-alone cinemas in the neighbourhood, it excited me tremendously. It triggers my thoughts about the transformation of Bangkok’s urban landscape.

When I moved back to Bangkok a few years ago, it just happened that I ended up living in Phra Khanong area where I was very new to it. It’s on the other side of this big city as opposed to Don Muang, where I grew up. My last recollection of this strip was the heavy traffic jam on the intersection and there was a row of cinema signage.

The building I live in now is called the Bloom Condo but according to SEA Movie Theatre Project in 2009, it was Asia Rama. SoiDB has both of them in their database. That is such a repurpose from an entertainment venue to a residential tower.

On top of that, it is gorgeous to see its transformation as well. An enthusiast has posted a photo series of its demolition. And luckily, when Google Street View started to roll out in Bangkok in 2011, it has archived the construction of the new building as well.

Asia Rama was not the only stand-alone cinema in Phra Khanong area. There was a cluster of them. While it was in the hay day, there were at least six theatres and five department stores in this area. But I think the cinema was the last one operating. According to Wikipedia, it was closed down on 20 August 2009. The transformation is still happening as we speak. I will post about some of the other cinemas later.

Last reply was 4 months ago