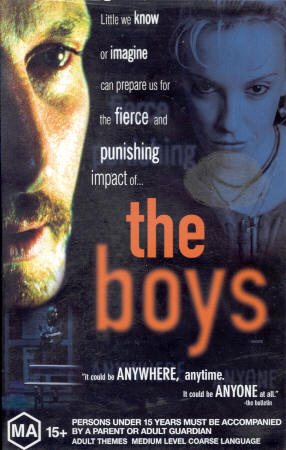 The second week of Video Construction class we get to see The Boys, a dark Australian film which I had never heard of it until I moved here and saw a TV commercial of the DVD few years ago. The reason is we have a special guest speaker, Stephen Sewell, Screenwriter of the movie.

The movie was a success in art house cinemas in the 90’s. This psychological suspense conveys domestic violence which in depth of men’s views. In the an ordinary Australian suburban, it is the first day out-of-jail of Brett (David Wenham) and he has got everyone home, mother (Lynette Curran), girlfriend (Toni Collette), the two brothers. But the party of this dysfunctional family only lasts for a day when the tensions get escalated into a brutal crime that night by the boys. The best part of the film is how it is structured and executed to build up the emotion of the characters until the end.

Having a chat with the writer after the screening gives us some creative insights, especially how it was adapted from the stage play. But one thing that interests me the most is that the funding government bodies both State and Federal, unlike Hollywood, taxpayers pay for Australian films to be made, rejected the script and would not give the money because of these vicious characters. Fortunately, the stubbornness of these newly-graduated filmmakers made it through and it paid of. Otherwise, we would not see the light of the dark of this film.