A Long Shivery Day in Moscow

Our main plan for the first full day in Moscow was the Kremlin Museums. The excursion turned out to be full of walking, walking, and walking in the shivery spring breeze. Apart from that, it was an exploration beyond expectation.

Usually, tourist sites weren’t really my things to explore but that’d be hard to dismay the itinerary when you were travelling in a group of friends. So, I needed to find something else to occupy myself along the way.

Street photography could the theme of the day. First thing I noticed on the way to Red Square was street cleaning. It was the sign of spring. (Speaking of which, I was amused by the street decoration of fake cherry blossoms, coming from DC with real ones.) 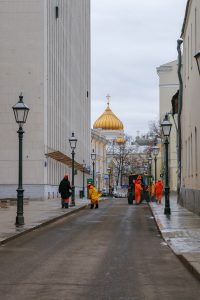 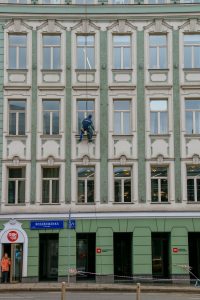 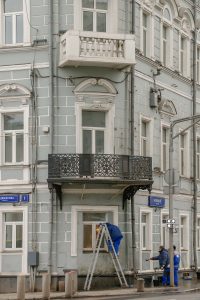 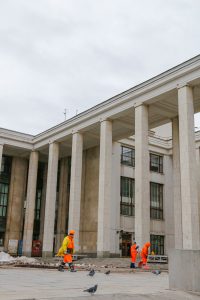 Then, I started to decipher Cyrillic script from a Metro sign. From that, I got into it, using a Wikipedia page to work on signs throughout the day. Photography was dropped from my own agenda on the day.

It was a very chilling and windy day. With that weather and without a clue, we were queuing up a long line to get to Lenin Mausoleum, thinking it was the entrance to a ticket office. That wait took us the whole morning away. After that, we had a lunch break and steered back to the plan to the Museums.

Unfortunately, we realised those signs and directions in the complex weren’t clear. It took us a while until we finally got to the ticket office. There were about five different tickets but we didn’t know what tickets to get. There were English descriptions but they weren’t comprehensive. I’d say communication designs failed.

Eventually, we purchased two tickets each for adults: one for the architecture complex and another one for the Armory Chamber. I got it later that the first one was to get in the complex with entrances to the cathedrals inside and an exhibition. Armory Chamber ticket was sold separately. The cheaper tickets must be to get in the complex but not the cathedrals.

It was about three hours of walking in the complex and the Amory Chamber.  That was when I found my enjoyment, working on deciphering Cyrillic script on museum labels. It was so much fun. By the time we were done in the complex, our legs were tiring us.

Anyhow, the weather got better a bit when got out. So, we had some more walk around Red Square.

Next mission was dinner. The goal was at White Rabbit restaurant. We had been in one of their branches in Murmansk. And it had been really good. However, after a train ride and a loss on the street, we got to the place to find out that we needed a reservation. We ended up in a pan-Asian restaurant in the same mall called Zodiac.

An Asian restaurant in Moscow? I was sceptical. But it would be interesting to try Thai food there. I had fish with green curry flavour and a lemon tree. That would be the closest to Thai on the menu. The rest got other Asian dishes. With a surprise, the dining experience blew us away. The presentation was intricate. Moreover, the flavour was on point. We were really impressed. On top of that, when the chef came to meet us, we would not ever expect a young Russian bloke, showing up. That was even more surprising. Apparently, we got the craft from his Chinese master. Good on him!

After the long cold walk, the self-study on Cyrillic, and the dinner, my mental state was overloaded and I needed some drinks. As the girls went straight back to the hotel, the boys made a stop at an Irish-theme pub. And I finished it off with some Ukrainian craft beer and three shots of vodka to end up the long day.

New Year and Christmas in Tbilisi