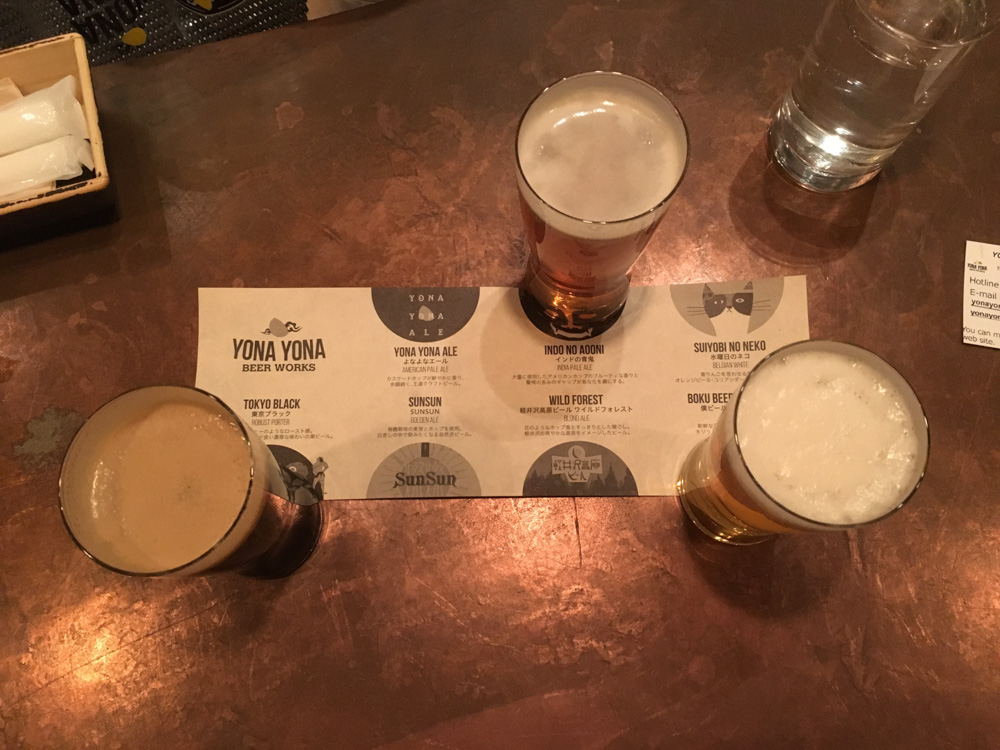 It was impossible for me not to drink while in Tokyo. The questions were: what to drink, where to go, and how smashed it could be. And I did so, almost like a local did or to the same level as I would in the home cities.

The first two nights of the four-night stay were mild. It started with some mainstream beer at the capsule hotel on the arrival. The following day, I got to taste the first craft beer of the trip in Tsukiji Market and more beer along the day. That was it.

The last two nights, however,  were worth elaborated.

The drinking ramped up on the third night. I booked Shinjuku walking tour from Air BNB Experience. The guide showed us the area including where to drink. Of course, there wasn’t a shortage of it. I expressed I was into craft beer. He didn’t take us to one but after the tour, he directed me to a local brewery, Yona Yona Beer Works. Their beers were very impressive. I ordered more than I should have just because it nearly hit the end of happy hour. The cutest thing was a sheet of paper laid down to indicate what beers on it.

As the result, I was drunk already when wandered off. However, I went back to where the guide showed us—Omoide Yokocho—to get the feel of izakaya culture. This alley was my kind of scenery and atmosphere. But with the amount of beer prior consumed, I could only get one sake and some snacks on skewers and needed to catch the train back before it got too blurry to do so.

But it didn’t end when got back to the hotel. After re-checking-in and changing in a robe, I order a potato soju at the bar. It was just after midnight and there were more people than any other time I was at the bar. I  could just assume they were stereotypical Japanese salarymen.

The Night Drinking with Locals

That night cost me a bad hangover in the morning after but I managed to Sensoji Temple. It was a long walk and got back to the hotel late in the afternoon to decide how to spend the last night in town, searching for a pub within a walking distance.

I ended up in a local, 338 Counter: Ueno Music Cafe & Bar. There was no expectation but the place was the tiniest I’ve ever been to. It was on the floor of a small building. The seats were only at the bar and could accommodate just less than ten people. When I entered the room, others had to squeeze to let me sit at the near end of the bar.

On the other hand, that intimacy translated into a cozy and friendly mood. The hospitality of the pub owner and other customers was incredible. Apparently, the night was exactly its three-month anniversary. The owner kept feeding us food which I had to turn him down because of the sushi (with sake) I had earlier.

The only lady in the house introduced me to Kirin Whiskey that I stuck with all night. She also drew each one of us a portrait and gave us as a gift. When other guys found out I was Thai, they told me they took a holiday in Thailand every year. There was even a framed photo of them, riding an elephant, in the pub. Later on, a new customer got in and handed his music to the owner to play. We made more space for him.

The night went on, the group of the guys left, and I was pretty pissed. The owner walked me down the building but I decided to get back up. There were only four of us left. We took a selfie and that was the last thing I remembered. I wasn’t sure if I could let myself get intoxicated like that if it wasn’t Tokyo.

Consequently, the next morning was a real challenge, getting to Haneda Airport in a peak hour with a terrible hangover. I made it on board though. It was a reasonable price to pay for an extraordinary night.

Eating in Toronto (and How It Reminded Me of Sydney)