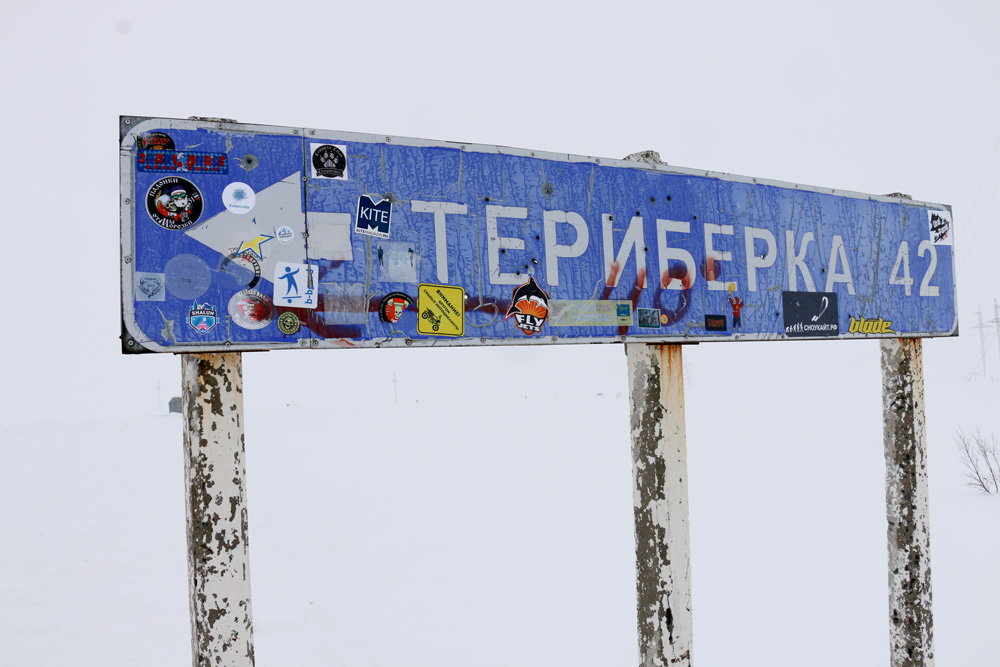 A Day Trip to Teriberka

After a short cold walk around the hotel in the morning, the first full day in Murmansk was a drive to Teriberka (Териберка) to see the Arctic Ocean. That wasn’t just long but also plain white and full of snow. And it was worth the ride.

The trip was almost scrapped because of the weather. The snow could block the road and we would waste three hours of driving there for nothing. The guide gave us a choice to Snow Village instead. However, we decided to stick with it and took the risk. We were glad for that decision.

Along the road, we hardly see anything clearly outside the van even the sun. However, the sight of the tundra landscape in the snow just kept us excited. There were shrubs on the side, hills behind, and some manmade cabins every now and then. They were all grey contrasting with the pale white snow. Other than that, the only colourful things on the road were the reflective sticks to mark the edges of the road.

More importantly, it didn’t feel we were in danger of being in the van driven in the condition. We made two stops for photos: the road sign and somewhere with a snow wall. There, when we got out of the van, I grabbed the DSLR camera and got some shots of the spots to fulfil my photographic need.

It was still snowing in Teriberka when we arrived. At first glance, what stroke my attention was abandoned houses. According to the guide, the population was 500 because they had moved to Murmansk. Somehow, there weren’t as many abandoned houses in snowy town as we’d seen in an urban or desert area. I wanted to take photos more of those houses but we had to move on.

We got on a sleigh with a snowmobile (not reindeers, unfortunately) to get to the Arctic Ocean. The ride wasn’t far but rough with the wind and snow. But once we reached the shore, what we saw made it all the ride we’d done, long and rough, worth it. It was a slight feeling of being on top of the world. When I was done with photos, the guide told me that was warm for them at 0-1°c. I could only imagine when it was really cold.

When we took a sleigh back, I was starving, so were the others. We had to walk to the only restaurant in Teriberka for the late lunch. That gave me a good chance to explore the town along the walk. What I found were more than abandoned houses. There were more lively buildings along the walk including a new one.

To wrap up the day trip, the van dropped us off at the entrance to Aurora Village, where we would stay a night. It was halfway back to Murmansk. The snow finally stopped. While we were waiting for a FWD to pick us up to the cabin, the sky was cleared up. And we had time to just hang around on the road. Sunrays showed up for the first time in the day. And it summed it all.

Getting High in Toronto