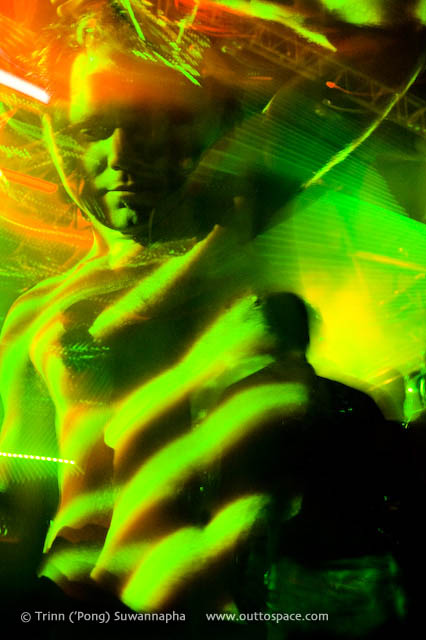 Out of the blue, I am contacted by Focus Theatre and asked for my photography of Sydney Gay & Lesbian Mardi Gras Party in their production of Blowing Whistles in Sydney, Adelaide and London. I say why not. Blowing Whistles is about contemporary gay culture. Two men is celebrating their tenth anniversary relationship on the eve of Mardi Gras and cruising for another guy online. That changes their lives forever.

I have not seen the show and am curious how my photographs are put in the show. London show is adapted for the local scene but they could not find suitable London gay party scene images for it. So they use mine which you cannot really identify specific scenes anyway. That makes me think how you put yourself into what you see and photograph.

For the past couple of years, I believe that we, a group of Flickr’s Sydney PhotoBloggers and photography students, has brought a new level of how the events can be documented and expressed on photography via Robert McGrath of Darlinghurst ArtSpace. However, they still choose happy snappy shots and publish them on their photo galleries after all. I take my viewers to explore the other side: up-close, candid and chaotic. Of course, they will not appear in a place that tries to sell you party tickets.

I always ask questions about being a queer. It seems too easy to be who you are these days. We almost have everything that we have been standing for: acceptance, equality and so on. What next when we have all of those. What are we going to fight for when we get the rights as any other people. Although we have passed the point that no one gives a damn of your gender, age, race or sexual preference, there still is discrimination agianst everything at some level even within gay & lesbien community itself. It is time to see ourselves and stop asking for those rights but start acting as we deserve them with respect. Yes, respect. If we want one, we have give one also.

Blowing Whistles is showing in Sydney until 15 November at Darlinghurst Theatre and will be a part of Feast Festival 08, Adelaide, at Bake House Theatre, 18-23 November. And it is showing in London until 29 November at Leicester Square Theatre.