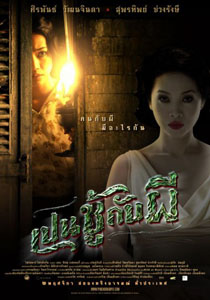 Sydney International Film Festival has become my only outlet to see Thai film in cinema. Last year the only film I saw from the Festival was Syndrome and a Century. It certainly is a homesick therapy. This year I have the same level of excitement to see The Unseeable (เป็นชู้กับผี) but in depth of nostalgia.

It sets in 1930’s, a pregnant rural girl, Nualjan, is in search for her missing husband in Bangkok. She ends up staying in a spooky mansion, owned by a mysterious woman, Ranjual. Then it comes to the series of spine-chilling scenes with strange characters: a man digging a hole, a girl playing hide-and-seek, a hand snatching food in the garden and so on.

This is simply a compilation of short ghost stories like Ju-on or Three. What makes this film different from others is the structure that wraps up all the sub plots in the end which goes back to the beginning. It implies that those frightening events will never end and they will be in suffering over and over again until the truth is reconciled. The circle of life and death and the consciousness of existence, are quite rare in these Asian genre, especially Thai cinema although they are pretty much in the core of Buddhist philosophy.

Moreover the Director, Wisit Sasanatiang, is such a master of nostalgia. His production is full of rich Thai references. He has got the same skills as Quentin Taruntino, the ability to recall, reuse and reinvent dated styles and create them their own. The unique palette which strongly based on Thai (Siamese) roots gives him such the recognition internationally. What he particularly uses in this film is a tribute to the master of Thai illustrations, Hem Vajakorn both in story and visual production.

Just the house in the set is worth all seeing this movie. I am such a sucker for this 1900’s East-West architecture. I even dreamt I lived in one. Now I am not sure I could do so after I have seen this film.