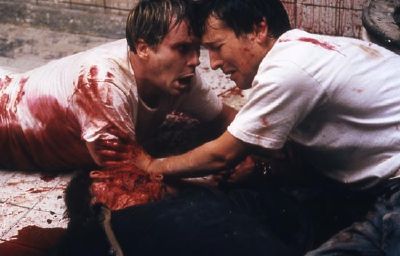 Recently, BRW magazine announced 50 Australian’s Top Entertainers. The only none-performer in the top ten are James Wan and Leigh Whannell, the Creators of Saw series. The couple won the Hollywood lotto when they got the green light from the studio to finance the film. They make millions of dollars by churning the sequels every year. Saw IV is about to be released this year. I had to see the original on DVD with curiosity.

The story starts with a hi-concept, two men (Cary Elwes and Leigh Whannell) wake up to find out that they are chained in a filthy bathroom. They don’t know where they are, how or why they got there. They have to play death games of the mastermind, Jigsaw (Tobin Bell). While they are trying to get free, a cop (Danny Glover) is relentlessly trying to catch him. And of course, it ends up with ultra-violent climax and now predictable anti-climax.

There are the keys of this franchise’s success. Hollywood is always looking for new horrors but it has not been fresh lately. Jason’s Friday 13th cannot be resurrected any more. They’ve already remade Texas Chainsaw massacre. They’ve borrowed Japanese’s The Ring and The Grudge with sequels. George Romero’s made a come back with another zombie flick. Their last original horror as far as I can recall was Final Destination dated in 2000 and Hostel in 2005.

Saw fills the gap with the evil puppet master. Jigsaw is psycho, intelligent and unbeatable. It’s the combination of Hannibal Lecter, Jason and Se7en’s John Doe. Despite of many holes in the scripts and over-the-top acting of Cary Elwes and Denny Glover, it has the elements that this genre gives, the cinematography, the editing and unnecessary blood scenes.

An Aussie home-grown horror has cracked the international market with Wolf Creek in 2005 but it didn’t have the momentum push and Hollywood backup like Saw. They all are in the new blood of horror filmmakers group called the Splat Pack. Watch out for more blood shed and they make money.