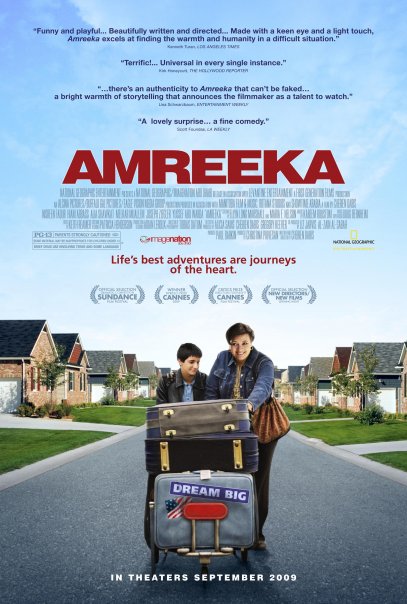 Last week, there was a mail with an advance screening ticket of Amreeka in my post without returning address. It could be any film distributor in Australia but I could not be bother to find out. We got the see the movie was the aim.

Amreeka is, more or less, related to my personal experience about culture crash. Muna, a Palestinian banker in West Bank, and her son, Fadi, won a chance of the lifetime to migrate to American. They live with her sister’s family in Illinois. The new life in the new world does not go well for them financially and socially. Especially the film is set on when the Bush Administration started to invade Iraq and the neighbour is indiscriminately paranoiac against anyone with middle-east background. Muna has to take a job at a fast food franchise and Fadi picks up a fight in school.

The Writer/Director, Cherian Dabis, reflects American suburban society in the eyes of a contemporary first generation immigrant. As a second generation, she also faces identity crisis and it shows in the film. This is another great example of how the the world in larger scale being portrayed in everyday life.

The spotlight of the movie could not be on someone else but Nisreen Faour as Muna. She plays such a universal mom which could be both naive and strong. Other cast is as well as excellent. The good thing is Dabis does not try to guide us to a provocative direction or solve any issue. It’s just life as it is.

To whomever it was, thank you for sending me that ticket. Seeing Amreeka was such a lovely thing to do on my Birthday.