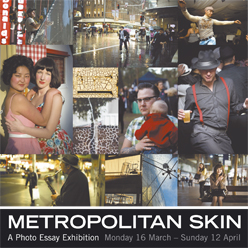 Street photography is my outlet to perceive life. I try to get my head around the complexity of cultures that drawn together in Australia. It is fascinating how people with different backgrounds express their identities. I have learned a lot about Sydney just walking around on the main streets and back lanes, at dawn and dusk, day and night.

My latest slide show exhibition is just about those theme I have been working on for 3 years. Robert McGrath, Vitek Skonieczny and I take turn showcasing how we see the city at World Square. In their words:

Metropolitan Skin is a photographic exhibition, presented as a slide show. It presents the differing visions of urban engagement by three photographers – Robert McGrath, ‘Pong and Vitek Skonieczny.

Robert McGrath
Screening between Monday 16 March – Wednesday 25 March
persona | passion | communality
Through his photo essays, Robert has photographed a wide range of milieus and activities across Sydney. He is interested in photographing events which draw people together based on a common activity, talent or passion. How people present at such events, says a lot about how they see themselves, which we experience as their persona.

’Pong
Screening between Thursday 26 March – Saturday 4 April
fusions | unready | entropy
‘Pong is particularly aware of the many groupings that are uniting in modern Australian cities. These groups often only exist within a sheer layer of each other. Weaving between those layers, ‘Pong juxtaposes aesthetics and understandings to create a truly contemporary view of our urban environment. He has a strong sense of visual irony which allows him to reveal the amazing world of human minutia within the “unexpected” city.

Vitek Skonieczny
Screening between Sunday 5 April – Sunday 12 April
cellular | organism | lifeblood
To Vitek, the city is alive. He shows human activity transforming the inanimate city into a living, breathing, shifting life force. The flow of its people and the patterns they trace, is the lifeblood of his constantly evolving ecosystem. He sees the massing of people into an unconscious, yet structured organism, flowing determinantly towards a mysterious, yet predetermined destination.

The show is curated by Robert McGrath and there will be some that I have put on this blog but some that haven’t seen the light before. Metropolitan Skin is on at World Square upper level (big screen) and lower level (on Sony plasma screens) until 12 April.