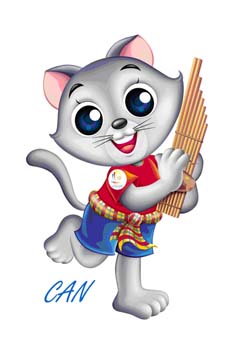 I don’t know why I go through the Opening Ceremony of 24th SEA Games almost the whole show, maybe because of my old profession when we did 13th Asian Games Opening and Closing Ceremony 9 years ago or just the unquestionable patriotism. It takes such a patience to download badly encoded videos from the official website. Since no one has put it on YouTube yet, giving the fact that Thailand has just recently unblocked the entire site. 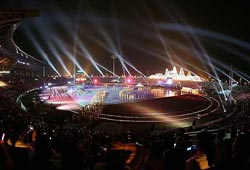 Moreover, it takes quite a thick skin to watch it through with a number of points that severely embarrass me as a Thai. You know, every time while I am watching this kind of performances, I always want to smother the commentators from the network who try to give every details of every movements on the screen as if we could not see the things. Luckily, these videos have no commentator to annoy me. However, this ceremony, there are two presenters explaining the concept before each segment and the other two voice over narrators describing in between all through the show, both in Thai and English. Now we are not just blind but also dumb.

The show tries very hard to tell the world how amazing Thailand is by beginning every segment with Amazing with capital A. Hey, that is a tourist pamphlet and it is an old one that has been used up for over a decade. I am not going to complaint about the oversaturated loyalty to the King in the opening segment, The Amazing Great King. The narration tells it all and it goes on and on and on and on. At last, girls in silver cat suits come out in the final segment, The Amazing Celebrations. Those baby cat dolls bring the joy to His Majesty the King’s 80th Birthday Anniversary, 5th December 2007 Sports Complex with their playful chreography and seems to fulfil the night perfectly.

SEA Games is a biannual Olympic-like of South East Asian countries. This year the Game is held mainly in the north-eastern city of Thailand, Nakorn Ratchasima or Korat. It is clearly an indulgence that the host shamelessly uses the event to inflate nationalism rather than celebrate the sportsmanship of the nations. Of course, with no giants like USA, Russia and China, it is much easier to compete amongst ourselves and win, at any causes.