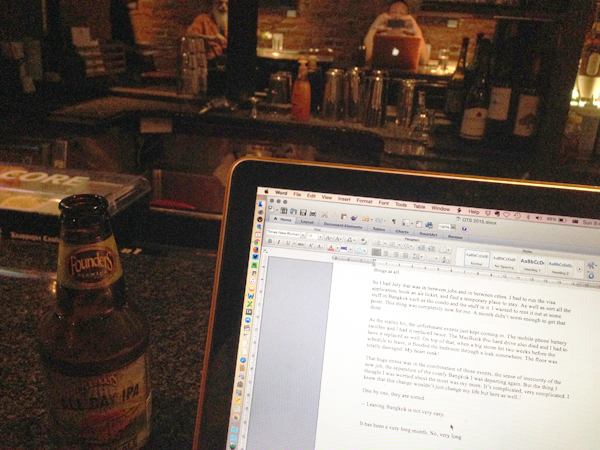 Washington DC One Month in: Winding down

This weekend is my first long weekend and the first month living in the US. In months since I decided to take this new job in Washington DC, this is the first time I finally could be able to feel at ease. Before it gets to this point, it has been such a ride dated back five months ago.

Looking back, in April when I knew I got the job, it wasn’t very easy to decide at all. I had to leave the well-secured position with decent benefits like health insurance and pensions. Even though the new work is in the same international organisation, the compensation as a consultant I’d get was only a flat day rate in a limited number of days per year. So basically, I’d only be in the job for about eight months without a guarantee. I took a plunge anyway.

Then the last two months in May and June at the old job were just full-on. I flatted out with the works. During the time, I didn’t get a chance to do any of the moving things at all. Nonetheless, that was rewarding to be able to produce works and I felt that they actually valued them.

So, in July, I was in between jobs and in between cities. I had to run the visa application, book an air ticket, and find a temporary place to stay. As well as sort all the stuff in Bangkok such as the condo and the stuff in it. I wanted to rent it out at some point. Being the opposite side of a tenant was completely new for me. A month didn’t seem enough to get that done.

As the reality hit, unfortunate events just kept coming in. The mobile phone battery was swollen and I had it replaced twice. The MacBook Pro hard drive also died and I had to have it replaced as well. But I lost a chuck of emails including the flight confirmation. It was in the system but it added to my stress. On top of that, when a big storm hit two weeks before the schedule to leave, my bedroom was flooded with water through a leak somewhere. The floor was totally damaged. My heart sunk!

That huge stress was in the combination of those events, the sense of insecurity in the new job, the separation of the comfy life in Bangkok I was about to depart again, and most of all, the mixed feeling about my mom. It’s complicated, very complicated. I knew that this moving wouldn’t just change my life but others as well. Obviously, hers was one of them.

It was such an emotional hurdle dealing with this. I could only imagine her feeling when I told her I was moving abroad…again. I knew she wasn’t happy about it and could only hope she would really understand my crazy soul.

Things were sorted one by one: an air ticket, a room through Airbnb, the visa, the phone battery, and the laptop hard drive. Other stuff I left in Bangkok had to get a friend taking care of it including fixing the bedroom floor and finding a tenant for my condo.

But finally, mom gave me a blessing. That actually made me feel I was ready for the new adventure.

August, here I came, landing in DC on Thursday afternoon and starting the new job the next morning. New stresses emerged. There was a miscommunication at the new job. They didn’t realise I started the job on the day. And most people were on leave. It was like I was stranded. Luckily, I was put with ex-colleagues until things were in places.

The biggest challenge was that I had to get a place to live within two weeks and I underestimated how hard the house hunting was. The landlord has bargain power over the tenant. I should have known that from the experience in Sydney but Bangkok probably spoiled me.

So not many choices for the budget I had and the cash flow was running dry. I finally found a place but it was such a hassle to get the first payment from the new job. So I had to juggle the money to be able to pay the house deposit.

All of that, I ended up sharing a house with another five blokes in a Victorian house. This could be interesting. And I’ve got the gym schedule back on track.

An alarming issue for me living in DC would be a drinking habit. Living in a city with much good varieties of craft beer is not very good for a person who drinks a lot like me.

It has been a very long month, no, very long months. They have been occupying my focus to just get those sorted—as they should. Things are slowly getting into their places. It just feels that I have just got to the point that I could relax and get to know the city and the States a little bit more.