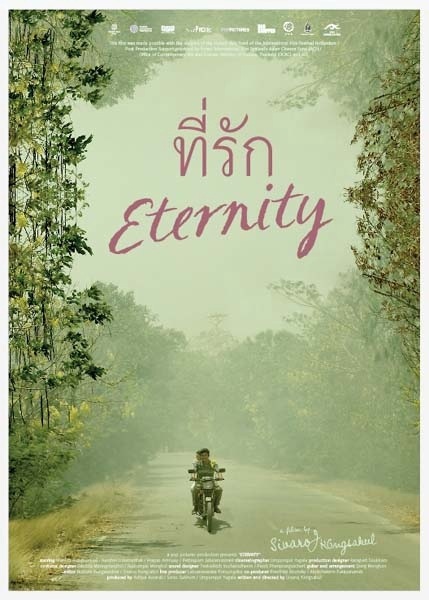 When a friend in LA message me on Facebook how she loved this Thai film, Eternity (Tee Rak) he saw in the film festival over there, I was anticipating to see it but not sure if I ever get a chance. Either it had already been screened before I was back in the country or would never seen the light in Thai cinemas. Until Wise Kwai blogged about it as a limited screening, I just had to put it my weekend schedule.

There is something about this film that moves you without following the classic story telling rules. The tagline is just about the love of a young couple which happens to be the parents of Siraroj Kongsakul, the director. He tells the story through snipplets of memories of his late father, mainly on the young girl’s first visit to his hometown. And that is it, no big arguement between them or no culture crash of the city girl and the country folks.

Everything is understated. The transitions of the first sequence to the main story and the last act are very subtle. Some scenes are just the two people talking without cutting and they even turn their back on the camera. We can only see medium shots of them each twice. But when these strings of momeries are tied up together, it becomes a haunting experience.

A great love story always comes with pain. In this film, it subsides so deeply that you can only feel it. We see the adorable ones build their relationship along the journey but in the end, nothing lasts and one has to live with it, like anyone of us will…