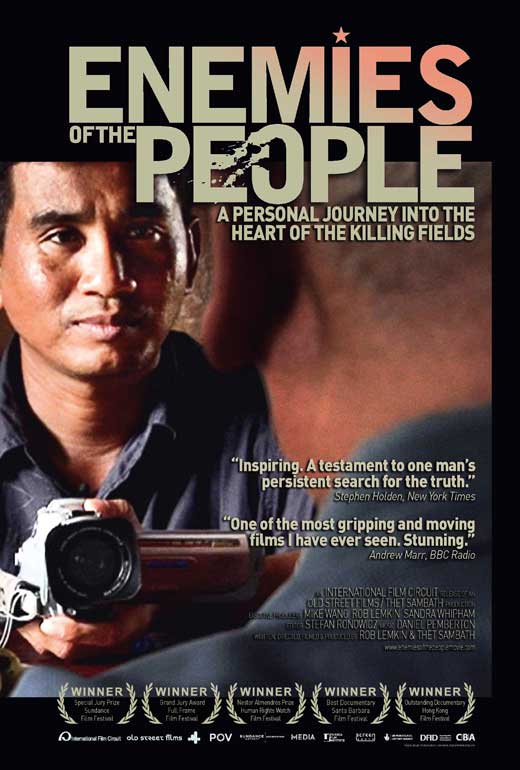 Teth Sambath is a Senoir Journalist at Phnom Pehn Post. For ten years, he has travelled out in the rural areas of Cambodia to find out what really happened in the Killing Fields, where Khmer Rouge executed its accused political opponents during the regime in 1975-1979. He slowly gains trusts of the perpetrators from the low end of the chains of command who did the killing to the Brother Number Two, Nuon Chea and have them give their testimonies in front of the camera.

And it becomes a stunning rare documentary, Enemies of the People, which is beyond talking about a conflict but more about getting over it.

Teth has got the best asset to look into this topic—he is local. He uses it to make rapports with his subjects to get them speak their stories since no one would open their mouths to any foreign journo, let alone come out in the open and admit the things they have done. Even so, it takes time and patience to track and crack them. However, he never exploits them and very much empathises with them.

It is heartbroken to see the sorrow in Non Chea’s eyes when Teth discloses later on that he, himself, was a victim of Khmer Rouge as his father, mother and brother were killed at the time. Here, there is an interesting balance between a personal journey and an investigative journalism. This makes it such a fine piece of story telling. It is personal but not judgemental.

The Killing Fields story is one of the darkest moments in modern history. In such a human bloodshed story, for this one in particular, we hardly see what comes out from side who commits the violence. Once we witness that in this film, there is nothing but guilt and remorse. We all have that in a certain degree. We are all human, after all.