It was another big day before the shooting with the actors: Gerard, Fay and Helen. They got the role of Daniel, Betty and Chrissie respectively. I spread the time of arrival to get a chance to time sometime with Gerard and Fay alone with myself to talk about the character.

Gerard is a very smart man and deserves his award from Tropfest. He got to my house on time at 10 am. We had a chat. I was worried about his speech but it went fine with his breathe technique. And we used a tape recorder to help him with the speech as he had it in his last film. I had poke him all the time that he is in a different film. However, There were some issues emerged. The first one was it took time for him to learn how to fold an origami boat and the outcome would be as neat as I imagined. I might have to slice edit as jump cut. Another one we found that it was hard for him to portray a complex character. Especially the laundry room scene which had two beats. He could be too angry without a dramatic arch. I will have to work on him on location. 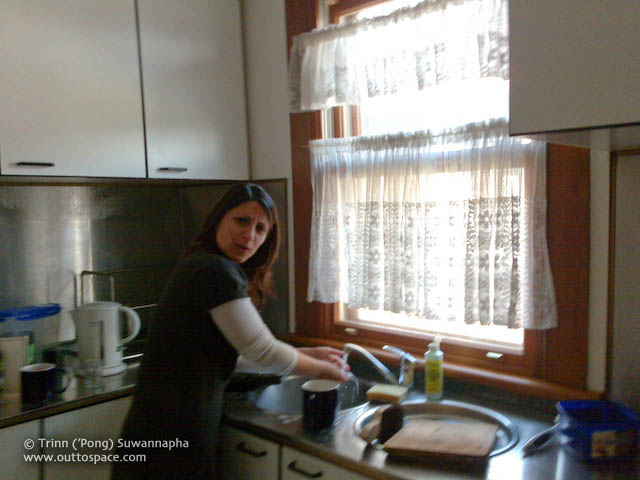 Fay arrived when we were having lunch. I cooked Thai marinated roast beef as a treat. It’s Sunday after all. She was amazing with her method techniques. She took my direction very well and gave me a goosebum when we rehearsed the laundry scene. We talked about each scene she had to perform by herself until Helen joined us at 4 pm.

Helen also auditioned for Betty role but I found her look was too young. I offer Chrissie part becsause she had a caring touch in her. They got along fine with the kitchen scene.

Over all, it was a great day. Thank you Joy for coming along for the rehearsal I was very happy with result and the lunch I made. I still have to work on Gerard but I believe he will be good at it.

One thought on “Meet the Cast”