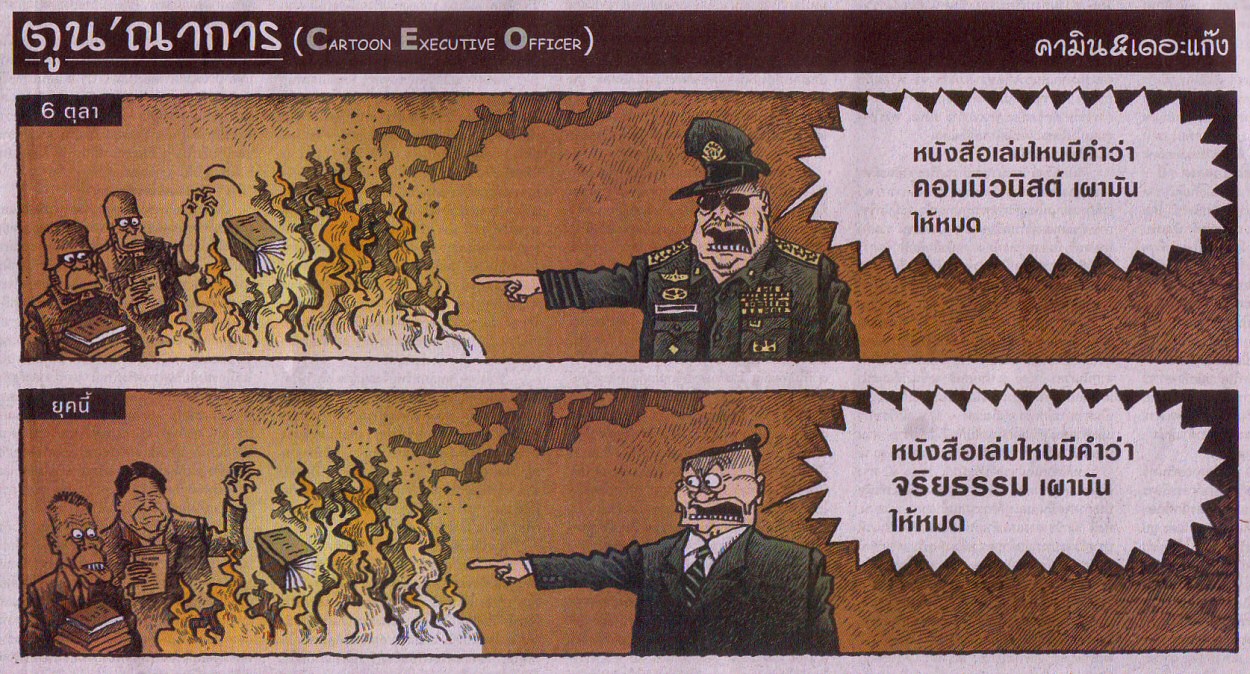 People Alliance for Democracy (PAD) has taken over Thai Government House and the two biggest airports. The political unrest is now taking a huge effect on economy. Stilgherrian writes a clear summery on the current crisis. To understand Thai politics, we need to acknowledge what is unique about her political timeline and social turning points.

Since the reform of in social and economical structures in the Kingdom of Siam to survive Colonialism in the reign of King Chulalongkorn, Thai/Siamese world has never been the same again. The royal government was forced to step down from its power by overseas graduates and the military in 1932. English constitutional monarchy and parliament system were adopted to build Siamese democracy. Then the coup itself split into difference ideologies.

World War II had less effect on the country than other nations because they were not concerned about winning, losing or gaining independence whereas in the Cold War, Thailand was standing right beside the mess of it. In the 1970’s, the uprising of student movements and protests successfully stopped American military presence in its shore. And the fear of Communism led to the tragedy of the massacre in Thammasat University.

The military has been a big player of Thai political vicious cycle since the first coup. The simplified cycle is a coup, an appointed government, a new constitution draft, a general election, an elected government, a corrupt government, media circus, anti-government protests and a coup. The nasty ones were on 6 October 1976 and in May 1992.  Although many missing people are yet to be found, those two events caused completely outcomes on the society.

That day in October is still suppressed in Thai modern history, even ex-Prime Minister, Samak Sundravej, is still in denial. It was a victorious declaration of the military dictatorship over the accused Communism. On contrary, the violence in 1992 would be the last time the army laid their hands on it own people. Finger crossed.

On the other hand, one political party that is always there is the Thai Democrat. They are the oldest and the most conservative of all the players in terms of their operation. Some analyses say that there are only two major political parties in Thailand: The Democrat and the Others. The Others mean any party which forms big enough to be the contestant and it does not necessary last such as Chat Thai Party, New Hope Party, Thai Rak Thai Party and its old band, People Power Party.

Basically, these parties have the electoral based in the North and Esarn (Thai north-eastern region) while The Democrat strong hold is in the South. Bangkok voters are swingers. They usually shift the votes amongst the two and some third neutral party. Bangkok Governor election is used to indicate the popularity since Bangkok has the most number of Members of Parliament in one area. At the moment Bangkok seems to in the favour of The Democrat.

On top of that, The Democrat always fight by the book, distance themselves from any other conflicts and be careful not to associate with any military coups or protesters. Recently, Abhisit Vejjajiva, the Party leader, offers himself as the middleman between PAD and the Government.

Thailand is not unfamiliar with political polarisation at all. You either stuck to absolute monarchy or supported constitutional monarchy. You could not be a Socialist, it was a Communist who you were. And now, we have the anti-government (yellow corner) and the pro-Thaksin (red corner). It is all painted in black and white, and this division is the biggest ever.

Thaksin Chinawatra is most controversial political figure in Thai history. He combines business tycoon practices into his political strategies and touches the soft spot of Thai society that no one have done before. For the first time someone reaches to the poor. For the first time an elected Prime Minister does something for them. The superb marketing plans, as known as policies, gives them radical and tangible projects to help them and keeps reminding them of whom delivers it.

Meanwhile, the wealthy Bangkok, a classic primate city story has been sucking all the resources in the country and becomes the centre of everything. The gap between two fundamental social statuses: the rural poor and urban middle class is widened. Its organic growth should not be affected until they noticed something dodgy behind the scenes. Here we go in the vicious cycle again.

However, two major leaders of PAD had closed tie to Thaksin. The founder, Sondhi Limthongkul, was an outspoken supporter of Thaksin until he started to criticise the Government and eventually his media outlets were shut down.

And when Thaksin first set his foot onto the politics, the penetration was made trough Chamlong Srimuang, the leader of Phalang Dharma Party of the time and is a key leader of the protester. Later on, the Party was handed over to him. Then he resigned from it and let it died out since there was no popularity left.

My big concern on this situation is not the confrontation between PAD and the Government but the people who wear yellow and red. They are all Thais after all. I wonder where all the Member of Parliament is. Should they be the voice of the people who elect them? Or are they busy forming a party for the next election?