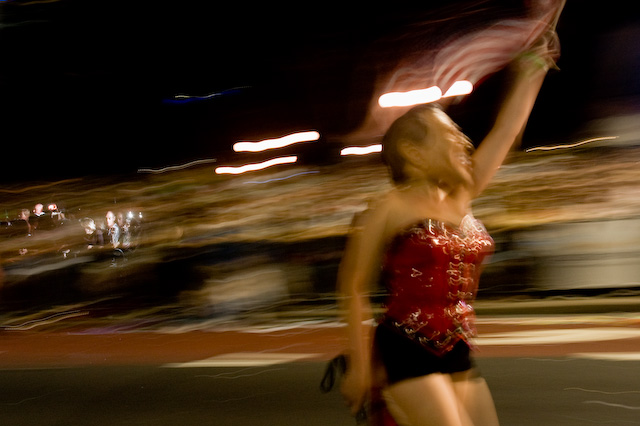 It is my little dream comes true to have my works exhibited at Australian Centre for Photography even though it is just a part of the slide show of Mardi Gras: the Slide Show last year. Quote from the press release:

Last Mardi Gras season, a group of budding photographers drawn from Sydney College of the Arts and the Sydney Photobloggers group (who reside at flickr.com) were brought together by Robert McGrath of MG Photographic with the aim of capturing the originality and exuberance of Sydney’s Mardi Gras season.

Morgan Carpenter says that my photos have changed over the year. It is essential to explore retrospectively on your own works to see how it has shaped in a period of time. This small exhibition gives me a chance to look back at myself and I start having a flashback.

Late 2006 I suffered from a drawback feeling. Things went not too well on the year for all sorts of reasons. And I found that that my photography was stale, especially in the contents. So I decided to have a theme to focus on. The idea was to capture Sydney’s diversity through its community events and celebrations.

I was looking at Sydney Gay & Lesbian Mardi Gras to kick off the concept. Fortunately, Mardi Gras: the Slide Show was looking for a handful of photographers via Sydney Photobloggers Group for the project. My Fair Day series impressed the producer, Robert McGrath and got me in.

Best of all, this art project gave the photographers their own space to express the creativities. The event pushed my limits technically and creatively as I tried to approach it different ways from what I saw Mardi Gras photographs and from my own comfort zone. The day after I was still exhausted mentally and physically. The award from the project was just an extra, the experience that I could share to the larger audience and got me this far was the real deal.

For the first time I feel we have a body of work that can convey the complex magic of Mardi Gras to those who’ve never experienced it directly.

The Slide Show is presented at Video Lounge, Australian Centre for Photography until 8 March.

One thought on “Mardi Gras: the Slide Show 2007 Retrospective”