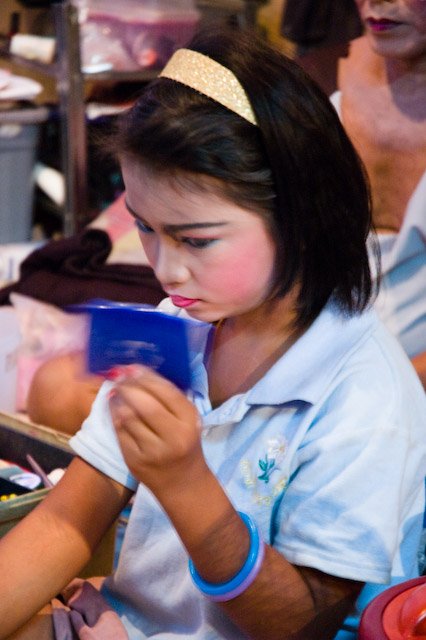 Likay is the most popular Thai folk theatre in the country. Because the practice of likay is not confined to strict classical Thai performances, it has a long history of its adjustments to audience demands and technologies while maintaining the traditional integrity. Richard Barrow has a sample clip of a likay. In the old days, when it was their peaks, some hi-profile troupes had their own TV programs. However, since the popularity is going down, surviving the fierce competitions from modern entertainments is not easy.

Nok Krajib (นกกระจิบ), 11, is the youngest of 14 performers in Petch Jing Troupe (เพชรจริง), where she is being trained by her extended likey family from Sukothai Province in the north of Thailand.

After school tonight, she gets back home, putting on make up and dressing up to get ready for the show.

Her home is the theatre which is moving around Bangkok for the best deal to temporarily reside in the community. They have been here in the market of Chaeng Wattana Housing Estate, northern suburb of Bangkok, for a month.

Just a quick preparation before the show by the key performers while others are still dressing.

Petch Jing, the leader of the Troupe, is fixing the mixer. The audio system has been the mojor problem since the show started tonight.

Nok Krajib’s small appearance is while the market is closing down for the night. No one really pays attention to the performance except a bunch of local kids and a glue sniffer. The troupe shares electricity with the market therefore they can only use the full power after the market shut down.

Then she goes off the stage to sell garlands to the audience in the market. The only show income is from the garland selling to the patrons so that they can wear them to the favourite likay performers.

And she is back on the stage again as a dancer in the last half of the show which is just a sing-along with karaoke but it is the peak of the night when they can interact with the crowd and sell the most garlands. Unfortunately, the audio issue is getting worse. The noise is too hard to fix so they have to wrap up the night with frustration.

2 thoughts on “A Night at the Likay”